Palmas Vicinity Map, Getting to Bacolod and Negros Occidental

Enjoy the serenity of a resort by the sea at the same time that the amenities of Bacolod's downtown area are 10 to 15 minutes away. Gaisano City Mall with its stores, supermarket, bookstores, restaurants, and theaters is less than ten minutes away, so are Goldenfield Commercial Complex and Casino Filipino. For the night owl, Goldenfield has ball room dancing clubs, bars, videoke bars, restaurants, a bowling alley, and several hotels and motels. Practically part of Goldenfield is Aboy's Restaurant, a favorite of locals and balikbayans, really one of the "Must Try" eating places in Bacolod. 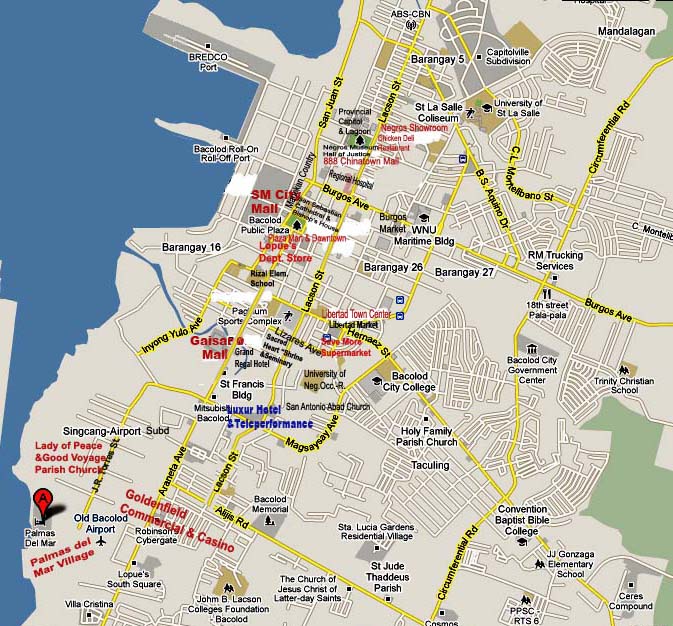 The quickest way to go to Palmas from the Bacolod Silay Airport is to take a taxi or to ride a Van for Hire. Fare for the Van is from P100 to P150 per person from the airport to SM City near the plaza or to Gaisano City Mall. For a little extra, the Van driver should be able to bring you to Palmas. By taxi, the way to Palmas can't be simpler. After about 6 kilometers, the airport road meets Lacson St., which goes past Silay, Talisay, and most of Bacolod until it intersects Magsaysay St. Turn right/west in Magsaysay St. and follow the road as it bends to the south and leads straight to the entrance gate of Palmas del Mar Village.

Getting to Bacolod/Negros Occidental - By Air: Negros Occidental is usually reached through the capital of sugarlandia, the city of Bacolod. The Bacolod-Silay airport is 55 minutes by air from Manila and 30 minutes from Cebu. To and from Manila, there are 3 Philippine Airlines flights, 5 Cebu-Pacific flights, and two Air Philippines Flights. Air Philippines also connects Bacolod and Cebu with one flight in the morning and another in the afternoon while Cebu Pacific has one flight in the morning. All other parts of the Philippines and the world go to and from Bacolod via Cebu and Manila. By Sea, Bacolod City is an 18 to 24 hour cruise from Manila via Negros Navigation and Aboitiz Superferry. Once a week, there are boats to and from Cagayan de Oro, Dipolog, Ozamiz, and Zamboanga (See Negros Navigation and Superferry websites. Bacolod and Iloilo are connected by almost hourly fastcraft vessels owned by Weesam, Oceanjet. See boattrips schedule for information and contact numbers of the different companies.

Several Ro-Ro liners ply the Bacolod-Dumangas (port in Panay) route and there are trips throughout the day and night. These Ro-Ro vessels accept passengers travelling without vehicles and the fares are much cheaper (less than P100 for some lines) although the trip takes from 1 1/2 hours to 2 1/2 hours. Smaller vessels bring passengers from Pulupandan to the nearby island of Guimaras. The island of Bantayan, also known for its beaches, is accessible through motorboats that dock in Cadiz, Escalante, and Sagay. Land travel to and from Cebu is also possible. Ceres Liner (homegrown Negrense although it has conquered the archipelago) goes to Cebu from Bacolod via Dumaguete, Escalante, and San Carlos. (For a better description of the Ceres land-sea route to Cebu) By land and sea travel, Cebu is about 7 hours away. From Dumaguete City in Negros Oriental, Bacolod is 5 hours away via Mabinay in the south.

Click on Image To Inquire or Book Your Rooms

To book your next vacation at Palmas del Mar Bacolod, or let us help you plan your wedding in the tropics, company conference, or banquets get in touch with us.

Or send us an e-mail:

For hotel accommodation and other information:  [email protected]

Locations of Visitors to this Site